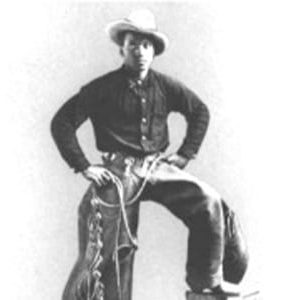 Born in October of 1890 at Saint Mary’s, Kansas, George Fletcher was probably the greatest African-American rough stock rider in early-day rodeo. He grew up around Pendleton, Oregon, and spent his youth working horses on area ranches and on the Umatilla Reservation. He entered his first rodeo in 1906 at the age of 16, and soon became an exceptional saddle bronc rider.

George Fletcher is remembered for his fine saddle bronc riding at the 1911 Pendleton Round-up. In the finals against John Spain, Jackson Sundown and two others, he unquestionably made the best rides, but the judges awarded first place to Spain (even though he probably “pulled leather” in his last ride), second to Fletcher, and third to Sundown. Today, there is little doubt that the judges discriminated against Fletcher because he was black. He was not allowed in many large rodeos thereafter because the other cowboys did not want to compete with him — both because of his evident skill and because of his race.

Fletcher made exhibition rides on rank broncs, bulls and buffalos at Pendleton and elsewhere prior to his service in World War I. After the war he cowboyed for many years in Oregon. He was among the 10 original honorees inducted into the Pendleton Round-up Hall of Fame in 1969. George Fletcher passed from the arena in 1971.