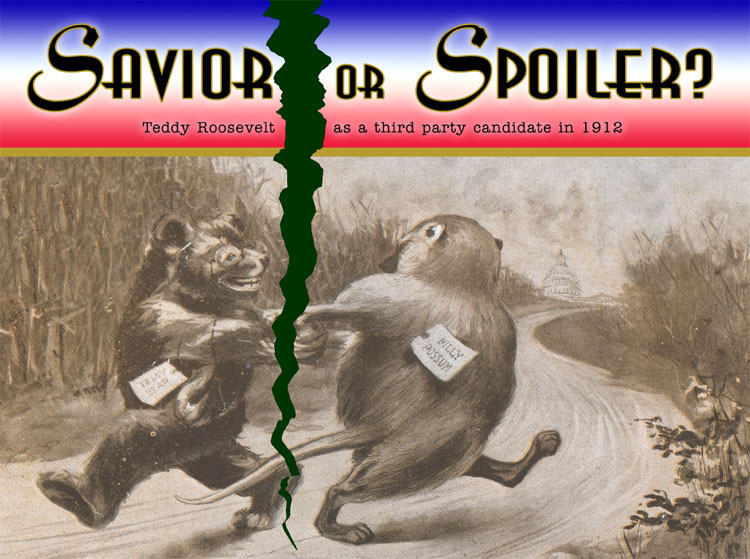 With the assassination of William McKinley on September 14, 1901, Theodore Roosevelt became the 26th president of the United States. Elected to a full term in 1904, he declared that he considered it his second term and would not run again. He regretted making this statement almost immediately. Roosevelt would only be 51 years old when he left office, more than able to seek another term. Nevertheless, determined not to go back on his promise, Roosevelt hand-picked his Secretary of War and close friend William Howard Taft to succeed him as the Republican candidate in 1908. William Howard Taft was a reluctant candidate who had no presidential aspirations – what he really wanted was to be a Supreme Court justice. Once elected, Taft was not the progressive candidate that Roosevelt hoped he would be. Roosevelt was especially upset about the undoing of many of his conservation reforms, particularly when Taft dismissed Chief Forrester Gifford Pinchot. Taft knew he was a disappointment to Roosevelt, and wrote to him in one letter, “It is now a year and three months since I assumed office and I have had a hard time.” Taft’s first term performance would eventually convince Roosevelt to go back on his word and run for a third term as president in 1912. Meanwhile, Woodrow Wilson had been president of Princeton University since 1902 and was garnering attention by delivering speeches that advocated increased government power to regulate big business. In April of 1910 Wilson was interviewed and rejected as a possible Progressive Party candidate. However, he was courted by Democratic Party boss “Sugar” Jim Smith to run for governor of New Jersey later that same year. Party leadership chose him in part because they thought him politically naïve and easily controlled. Instead, after winning the 1910 gubernatorial election, Wilson defied the wishes of party bosses by pushing for reform-minded legislation that included an anti-corruption bill, an election reform bill, an anti-trust bill and workman’s compensation.

While this election had many issues, some of the major issues included were race, immigration, big business and progressive reform. Three of the candidates would have to change their positions in regard to race in order to increase their electability. For example, Roosevelt had entertained prominent African American guests at the White House during his presidency. However, he tried to diminish his record of open relations in order to be more competitive with southern voters. Debs, the socialist candidate, believed deeply in racial equality and wanted to include African Americans but was prevented by his labor union base. On the other hand, Woodrow Wilson was raised in the south during the Civil War and spent much of his campaign trying to minimize the impact of previous writings that revealed racist and anti-immigrant views. Wilson’s record on these issues was well documented during his time at Princeton where he wrote an American history textbook containing derogatory statements about new immigrants from Italy, Hungary and Poland. Additionally, he perpetuated a ban on African American admissions while serving as president at Princeton. Candidates also clashed over the role of government in regulating big business. During the late 19th and early 20th century big business was bigger than ever with the likes of Andrew Carnegie, J.P. Morgan, William Randolph Hearst and the Rockefeller family as giants in the business world. Taft publically took the position that the government shouldn’t meddle with business, even though he enforced the Sherman Anti-trust Act during his presidency. Roosevelt, on the other hand, believed in having a big government capable of regulating big business. Wilson took this even further, finding it a moral responsibility of government to break up monopolies. The election of 1912 boasted three progressive candidates Wilson, Roosevelt and Debs, while Taft was the only candidate associated with keeping the status quo. Both Wilson and Roosevelt had a history of going against their political party bosses with their reform minded government. The fact that both Wilson and Roosevelt were running on a platform advocating change caused a split in progressive votes that possibly could have gone to one candidate in a conventional election. Roosevelt told a friend, “I would have had a sporting chance if the democrats had put up a reactionary candidate.” Roosevelt and Wilson kept their distance from Socialist candidate Eugene Debs, possibly to avoid having their plans for reform being compared to his. One of Debs’ advisors wrote, “My prediction that Roosevelt would steal our platform bodily has been fulfilled.”

Just as many of today’s politicians are accused of “flip-flopping” by each other and the media, Roosevelt’s departure from the Republican Party was regularly lampooned on the cover ofHarper’s Weekly. You’ll see in this exhibit magazine covers where Roosevelt is depicted as a chameleon and as the “newest arrival at the political zoo.” Wilson was also accused of changing his positions, and Taft had a particularly poor opinion of him for doing this, calling him “an utter opportunist.” Those who consider past elections to be less scandalous than the current political scene might be surprised to learn that the election of 1912 included a sex scandal.  A member of Roosevelt’s staff came in possession of a love letter between Woodrow Wilson and Mary Peck. Though he was urged by advisors to use this to his advantage, Roosevelt declined, saying, “It was hopeless to convince the public that a man who looked like a drugstore clerk was in reality a Romeo.” In yet another instance of campaign drama, on October 14, 1912, while on the way to a speaking engagement in Milwaukee, Wisconsin, Roosevelt became the victim of an assassination attempt. Though he was wounded, Roosevelt insisted on keeping his commitment and spoke for almost an hour before going to the hospital. He began his speech by explaining the situation, saying “it takes more than that to kill a Bull Moose.” Taft, upon hearing the news sent his regards and volunteered to suspend his campaign activities until Roosevelt was able to resume his schedule. Wilson reluctantly agreed to do the same. The rift between Roosevelt and Taft weighed particularly heavily on Taft, who at one point was so distraught he broke down in tears in front of a reporter. Roosevelt, in the heat of the campaign, hurled such insults at his former best friend as “puzzle-wit” and “fat-head.” Taft confided to a friend, “It is hard, very hard, Archie, to see a devoted friendship going to pieces like a rope of sand.”

The lives of Roosevelt, Taft, Wilson and Debs continued to be intertwined long after the election of 1912 was over. Teddy Roosevelt was a persistent thorn in Woodrow Wilson’s side for a significant portion of his two term presidency. Particularly critical of Wilson’s reluctance to enter WWI after the sinking of the Lusitania on May 17, 1915, Roosevelt toured the country giving speeches to this effect. Though he ran for re-election in 1916 with the slogan “he kept us out of war” Wilson was eventually forced to ask Congress for a declaration of war on April 2, 1917 after a message from Germany was intercepted informing the German Ambassador to Mexico of plans for “unrestricted submarine warfare” as well as a proposal to entice Mexico to enter the war as Germany’s ally by offering reclamation of territory that had become the American states of Texas, New Mexico and Arizona, should America not continue to remain neutral in the conflict. As the war effort progressed Wilson would urge the passing of the Sedition Act of 1918, making it illegal to criticize the United States government during the War. It was under the Sedition Act that Eugene Debs was arrested and sentenced to 10 years in prison after delivering a speech at the Socialist Party convention in Canton, Ohio. Though he was urged by advisors to issue a pardon to his former opponent, Wilson strenuously refused saying, “I know there will be a great deal of denunciation of me for refusing this pardon. . . . This man was a traitor to his country and he will never be pardoned during my administration.” Taft and Roosevelt did eventually manage to heal their rift through a chance meeting in the dining room of Chicago’s Blackstone Hotel in 1918. The two men shook hands, evoking cheers and applause from nearby diners. This was their last meeting before Roosevelt’s death on January 6, 1919. In the end, it was President Warren G. Harding who helped to heal the lingering wounds of the 1912 election battle – finally pardoning Eugene Debs and appointing Taft as Chief Justice of the Supreme Court in 1921. “Taft and Sherman”
To the tune of “Yankee Doodle”
Lyrics by: George E. Fairbanks “Voting for Labor (Debs)”
To the tune of “Marching through Georgia”
Lyrics by: James R. Townsend Flehinger, Brett. The 1912 Election and the Power of Progressivism: A Brief History with Documents. Boston: Bedford/St. Martin’s, 2003.

Gould, Lewis L. Four Hats in the Ring: The 1912 Election and the Birth of Modern American Politics. Lawrence, KS: University Press of Kansas, 2008.

Silber, Irwin. Songs America Voted By: With the Words and Music that Won and Lost Elections and Influenced the Democratic Process. Harrisburg, PA: Stackpole Books, 1971.